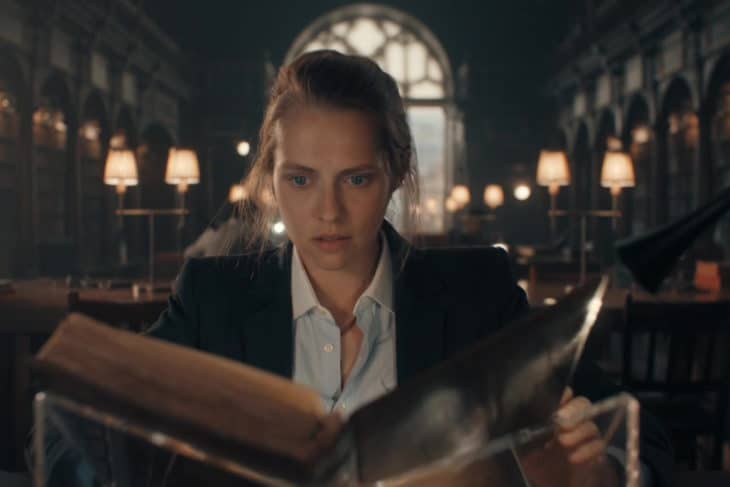 If you’ve ever read The Princess Bride (and you should) there’s a running joke throughout the book where — right before the action starts (sword fights, rock fights, etc.) — the author interrupts the scene with a ton of really long, really boring backstory. It’s funny in theory, and it kind of works, but notably the author (who also wrote the screenplay) doesn’t repeat this technique in the film. And if you’re sitting here going, “I had no idea The Princess Bride was based on a book”, maybe that’s why.

Not sure why I’m bringing that up now.

She’s got the book.

What’s she going to do?

Scroll on, if ye be brave.

She breathlessly describes opening the clasp with her trembling hands, etc. etc. but the main thing is that she opens it.

She also decides to ignore its magic vibes and treat it “like any scholar would” which is clearly stupid, but at least she’s opening the book which is all I care about right now.

The manuscript let out a small sigh.

Deciding not to record ‘Book sighed,’ I turned to my laptop and opened up a new file.

This familiar task–one that I’d done hundreds if not thousands of times before–was as comforting as my list’s neat checkmarks.

She’s talking about opening a new document in Word. This is how much exposition we get for “opened Word doc”.

She types out the manuscript’s name, number and title, eyes its binding and describes it in detail, and then —

Oh my God I was wrong!!!! She still hasn’t opened the book! She just undid the clasps and then opened a Word file.

She is now — for real this time — opening the book.

She says it’s hard to open, so she puts her hand on the book so it can “get to know her”. She tells us this is definitely not magic.

Her hand tingles just like it does when a witch looks at her, etc. etc. a foreshadowing, etc. etc.

Then the cover lifts easily.

Part of the book’s title is written in pencil. This strikes her as weird, since pencils probably weren’t invented when people were making manuscripts from skin. She says she could put her hand on the writing to learn more about it but that she won’t. For reasons.

The pages feel heavy as she turns them. It also has a funky smell. She notices that three pages have been cut out of the book.

Are we getting close to a semblance of a plot that might start to drive this story forward?

She notes the missing pages.

She looks at one of the illuminated images and tells us that it’s a depiction of the philosophical child, a step in the process of creating the philosopher’s stone. Except that it’s also not that, because all of the details are wrong.

This is when Diana notices that there’s actually text written inside the pages (rather than on them), making this a palimpsest (a thing that does exist) but because this is about witches it’s a… magic palimpsest.

She writes all this down, then tells us that her first instinct as a scholar is to dismiss this book entirely. You can see how she became a tenured Yale professor at 17 or whatever.

Now she knows she has to make a decision: should she ignore the book (NO what the fuck) or should she… continue studying the book?

and I swear I’m not joking —

returns the book to the library.

Then she leaves the library, and can sense something magic happening.

She is the worst.

The first chapter has finally ended.

Yell at me, as always, in the comments.

6 thoughts on “Disco Witches Recap 3: She opens the book and all hell breaks loose (it doesn’t)”