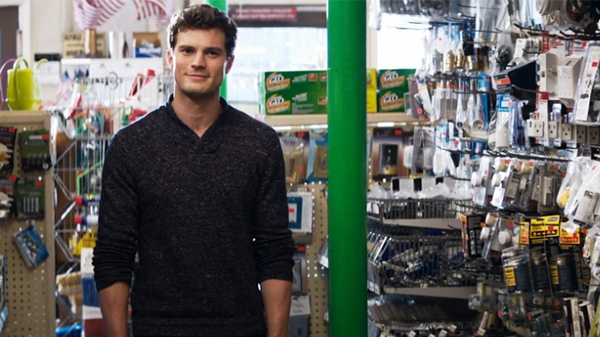 So this isn’t really “all” of Chapter 2, because I covered a bit of the second chapter yesterday in my random assortment of quotes from the first 35 pages. Technically, Chapter 2 opens with the incredibly boring (and yet simultaneously horrifying) background check that Christian Grey did on Ana literally minutes after she left his office, post-interview. But since I’ve already covered that, we might as well just carry on from the hardware store scene. And yes, your prayers have been answered because I’ll be tackling this beast chapter by chapter from here on out. I’m no Jenny Trout, but I’ll do my best.

Now unlike with the original trilogy, many people have mined the most unintentionally hilarious lines from this book hours after it was published. So to avoid boring you, this isn’t going to be a re-hashing of what you’ve already seen and it’s also not going to be quite so light-hearted. Because while I will still be giving you such masterpieces as “my cock concurs,” I’m also going to talk a little bit more about why I hate Christian Grey so much, and why writing this series off as “chick lit,” “mommy porn,” or “just bad writing” does a major disservice to both its readers and its critics. Because if you thought the themes of abuse in the original series was bad, it’s nothing compared with Christian’s first-hand account of it.

In one sense, I’m glad that Grey is this awful. If you only had the original stories to go off of, you could continue to argue that poor, naive, virginal Ana may have misunderstood Christian and his intentions — particularly in these early moments. But Grey is only too happy to disabuse you of that notion by proving that Christian is the absolute fucking worst — and he loves it. I say this without a hint of hyperbole: I have never fantasized about bludgeoning a fictional character to death before I started reading this book. But don’t worry — I would only bludgeon him to death with a bottle of Bolinger. I’m not some poor disgusting street urchin who shops at H&M and uses a Bic pen instead of a Montblanc.

Look at these grubby fucks.

But I’m getting ahead of myself. Maybe I’m wrong — maybe he’s just a tragic misunderstood billionaire who uses his money, power, and connections to enslave a naive girl and isolate her from her friends and that’s actually super romantic.

Carrying on from yesterday, Christian has pulled a background report on a girl he met for 15 minutes, found out where and when she works, has flown to her place of work in the middle of the day to mentally fuck with her. Dreamy!

He also takes great delight in speaking in innuendos she can’t possibly understand yet and takes every opportunity to eye-fuck her body any time she turns around. So here we go:

“No, not redecorating.” Oh, if you only knew…

No, this isn’t the worst thing ever. And it’s nothing compared to what’s coming. But I HATE that he’s doing this. When it was coming from Ana’s perspective, she knew that he was hinting at something other than his plans for the master bathroom, and that he was laughing at her. So we already know that she isn’t enjoying this game and feels insecure while he’s doing it.

Given how very very seriously he wants her to take his lifestyle, it feels all the more shitty and problematic that he’s toying with her like this. And when he later goes, “Oh, will she accept my dark soul?” you have to wonder why he’s so protective of a secret he was only too happy to mock her with earlier.

In that vein, please enjoy this next section:

Come on, Grey. You don’t have much time. Engage her in some conversation. “Have you worked here long?” Of course, I already know the answer. Unlike some people, I do my research.

In case you didn’t catch that, he’s asking her something that he already knows the answer to because he did a background search on her employment history without her consent. Then he takes pleasure in the fact that she doesn’t know, while simultaneously sneering at her shitty interview skills a week earlier.

Even from the outset everything he does is about taking pleasure in the mental, emotional, physical, financial, and sexual power he has over her. Yes, fine — EL James intended for him to start out the series “troubled.” You know, until Ana’s magical virgin vagina cures him — because fuck her mental health, career ambitions, and freedom: it’s all about saving him.

But seriously, fuck him. All of the hack writing about Detroit crack whore moms and foster care in the world doesn’t make up for this guy’s behavior at any point in the original trilogy, and he manages to be even worse from his own perspective.

It’s not so much that I don’t believe he can change, it’s that I don’t care at all. An abusive childhood doesn’t turn you into a stalker and a controlling asshole — and it’s an insult to real people who have struggled with mental health issues and childhood trauma to suggest that this explains or excuses him.

I assume we all need a little levity after that rant, so enjoy this dumb bullshit metaphor:

She smiles and her face lights up like a cloudless dawn. She’s breathtaking.

That doesn’t mean anything, Christian Grey. Die in a fire.

“Ana!” We both turn as a young man dressed in casual designer gear appears at the far end of the aisle. His eyes are all over Miss Anastasia Steele. Who the hell is this prick?

“Er, excuse me for a moment, Mr. Grey.” She walks toward him, and the asshole engulfs her in a gorilla-like hug. My blood runs cold. It’s a primal response.

Get your fucking paws off her.

I’m a broken record at this point, but I’ll say it again: I know that EL James intends for him to seem overly controlling and even slightly unhinged here. I also know that even reasonable people who aren’t gigantic assholes feel a sudden, uncontrollable, and largely irrational surge of jealousy if they see the person they like with someone else.

But this Beauty and the Beast dynamic that EL James is so blatantly trying for, where Ana needs to heal the Beast and save his terrified staff from his violent rages, remains deeply unromantic to me. Partly because I know that there are too many people who do feel obliged to stay with abusive partners because they see them as damaged, and see that damage as something that they need to help with. And partly because he’s just such a raging asshole that all of the descriptions of jeans that hang in “that way” will not distract me from how awful he is in every other way. 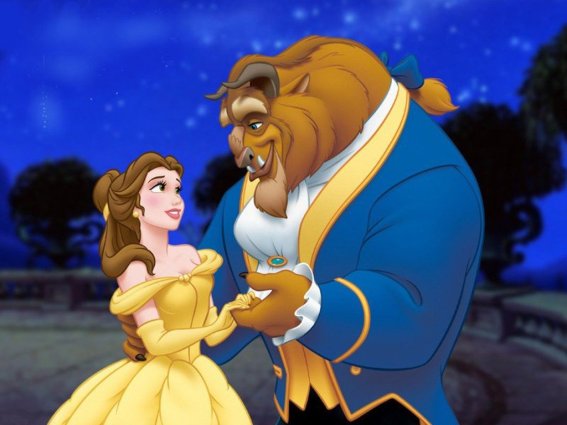 “Do I have to kidnap your dad, bitch, or will you come quietly?”
~Tale as old as time

People with serious issues do deserve sympathy and assistance. But Ana also deserves things — like a stable, loving relationship, particularly when it’s her very first. And the idea that Christian — who met her once about a week ago — is already treating her like his property is not “a bit troubling,” it’s full-blown terrifying. And being hungry when he was 4 doesn’t make up for that.

Here’s a little more of Christian’s exchange with Ana’s boss that should convince you that he’s just a poor, misunderstood soul who needs magic vagina love:

“Mr. Grey.” His handshake is limp, like his hair.

Asshole. “Wait up — not the Christian Grey? Of Grey Enterprises Holdings?”

Yeah, that’s me, you prick.

In a heartbeat I watch him morph from territorial to obsequious.

“Wow — is there anything I can get you?”

“Anastasia has it covered, Mr. Clayton. She’s been very attentive.” Now fuck off.

Yeah, Christian, go in — tell me more about where this cretin gets his clothes and what kind of car he drives so I can really hate him.

Now that Christian has dismissed this limp-haired, limp-handed, and presumably limp-dicked fool, he can turn his focus back on Ana and all of the subordinate training she’ll need for the relationship she hasn’t agreed to because he hasn’t even asked her out yet:

Shit, I’m out of time, and I still don’t know if I’m going to see her again. I have to know whether there’s a hope in hell she might consider what I have in mind. How can I ask her? Am I ready to take on a submissive who knows nothing? She’s going to need substantial training. Closing my eyes, I imagine the interesting possibilities this presents…getting there is going to be half the fun. Will she even be up for this? Or do I have it all wrong?

So in case you missed that, he is absolutely aware — before he’s even taken her for coffee — that she has not entered into a relationship like this before, and may not be ready for it. And the theme of “getting there will be half the fun” continues, because despite the fact that he makes her feel like total shit for it later, Christain fucking loves that Ana is so inexperienced — to the point where it’s not just creepy, it’s full-on manipulative.

I complained about this yesterday, but I’ll repeat it here: this is literally the same book just with a different inner monologue. So I skipped over most of the hardware store scene because ALL of the dialogue and the actions are exactly the same. EL James isn’t even taking the opportunity to have fun with the idea of an unreliable narrator by tweaking the scenes at all. It’s just faithfully reproduced, but with more “Fucks” and fewer “Oh Mys.”

Even with this change of narration, it seems like James can’t decide if Christian is a hard-talking sunnavabitch or if he’s Lord Byron brought back to Earth by the angels to share his poetic dick magic with the ladies. So we go from cloudless dawns to descriptions like this:

My face erupts in a shit-eating grin.

Does anyone describe their own smiles as shit-eating? Isn’t that usually an insult you lob at other people?

The chapter ends with Ana calling Christian to arrange for the school paper photo shoot because that’s definitely a thing that a small-town University newspaper would do. Christian leaves us with these ponderings:

I hang up before she senses my excitement and how pleased I am. Leaning back in my chair, I gaze at the darkening skyline and run both hands through my hair.

How the hell am I going to close this deal?

Sorry, got real caught up there. I think I speak for all women when I say that we’d all be thrilled if a potential lover thought of us as a business transaction.

And it only gets worse from here on out.