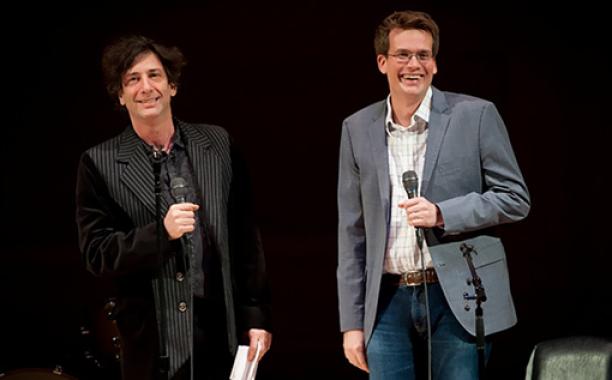 A couple of months ago, an xojane article by K.T. Bradford sparked an immediate, divisive, and heated argument online. Bradford’s article, which was hardly the first of its kind, explained that in 2012 she decided that she wanted to become a better writer. And since being a better writer is often achieved by being a better reader, she set herself book challenges based on the content in top magazines or awards lists.

But she kept hitting a wall.

Any long-time readers of this blog are aware that I’m also very familiar with the wall. And that “wall” is best defined as my inevitable boredom with the type of mainstream writing that is consistently nominated for top prizes, or is included in major magazines.

As a quick digression, this is part of why I never wound up updating my Booker Prize progress. I read two books from the list — To Rise Again at a Decent Hour and We Are All Completely Beside Ourselves — and hated them both intensely. They felt like empty novels about empty, wealthy, well-educated people struggling with existential problems, and are nevertheless desperate to be “important.” I have no interest in a strive for importance when there’s nothing of substance behind that goal other than the admiration of strangers and an entrance into the upper half of the middle class — but especially when absolutely everyone in the book is miserable, boring, and whiney. I fail to understand why this is such a hot trend in writing right now, but it’s doubly frustrating when you want to kick back with a book and avoid the miserable, boring, and whiney people permeating TV.

Now, sure, one of the books I mentioned above was written by a woman (Karen Joy Fowler), so I’m not going to pretend as though the only people who get nominated for prizes are white men — though it’s worth pointing out that the Booker Prize did go to Australian Richard Flanagan this year.

But regardless, I think that Bradford’s main argument about broadening your reading horizons by limiting them to white women, women of color, and men of color, was misconstrued in part by Neil Gaiman fans who took immediate offense to her using a copy of American Gods to make her point.

Yes, Gaiman’s book contains a lead character of ambiguous race (though Shadow is certainly not white). And yes, you could argue that it makes good use of its female characters. But that’s not the point.

Instead, it seems to me that it’s more about saying that if you are bored with what seems to be the status quo, eliminating those writers who primarily compose it might be the first way to break out of a reading rut. And the status quo is far too often dominated by rich white men who, by virtue of them occupying similar areas of race, class, gender, sexuality, and nationality, tend to have a similar outlook and similar interests when it comes to writing.

But this isn’t just about pointing out that rich white men have things in common, it’s also about pointing out how often their writing is lauded and rewarded. American and British literary canons are dominated by white men from wealthy backgrounds — so it makes sense that our perception of “great writing” is colored by that continued, problematic canon of writers and writing. If you aren’t enjoying the books that you’re meant to think of as great or challenging or interesting, it’s worth examining who’s setting that standard in the first place.

I am personally bored by the current canon. I find the endless empty, existential bullshit whining of unlikeable New Yorkers wandering around a Whole Foods thinking about death boring. I find white, middle-aged women traveling around the world, using people of others cultures and races as her “gurus” and props to be offensive… and boring. I find the sexual anxieties of middle-aged white men in the Midwest — you guessed it — boring.

So if it makes you feel more comfortable about the whole thing, don’t think of it as excluding white writers, or male writers; In fact, don’t let anyone else compose your book lists. But if you are, like me, bored of what’s currently being tossed up as “great,” it’s fair to suggest that taking a break from a certain category of writer might be the first best way to get interested and engaged in reading again.

3 thoughts on “Should You Take a Break from Reading White Men’s Books?”