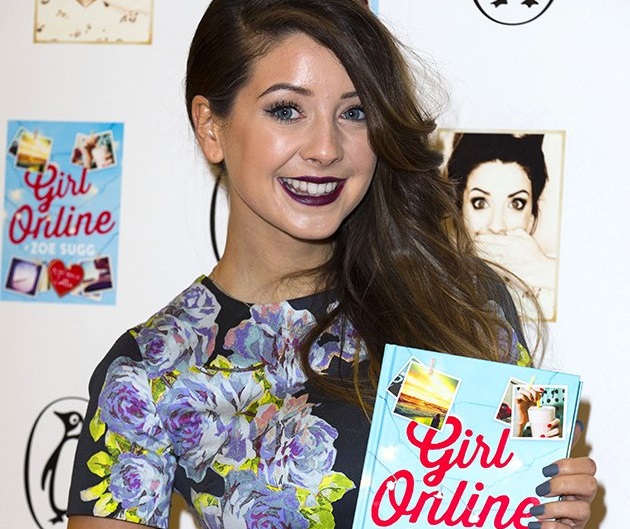 Many a snarky editorial has been written over the past few months following news that Penguin was publishing a novel by Youtube beauty guru Zoella (Zoe Sugg), Girl Online. The snark increased significantly when the book made it to #3 on the Amazon bestseller list based on pre-order sales alone.

“What about our student loans?” cried thousands of frustrated English majors.

While Penguin Children’s editorial director Amy McCulloch praises Sugg for her “incredible voice for teens” that she developed on her YouTube channel where she tackled “real issues like anxiety and cyber-bullying” which McCulloch believes enabled Sugg to “deliver a poignant, romantic and heart-warming debut novel,” some have cast doubt as to whether this isn’t yet another ghostwritten work with a famous name slapped on top to promote sales.

While Suggs is a blogger (as well as a YouTuber), a quick glance at the prose on Zoella.co.uk doesn’t immediately inspire confidence that she can pull off a polished voice (let alone the proper use of a comma). With that said, even if Suggs merely consulted with Penguin and a ghostwriter on the kind of plot or characters she wanted, while letting someone else do the heavy lifting (or typing)… would it matter?

Not only does this appear to be a fairly generic YA novel (it’s being billed as Notting Hill for teens), but ghostwritten works are nothing particularly new — particularly in the YA field. It’s fairly simple logic that a publisher feels a girl with 6.5 million subscribers is a safe bet when it comes to making back their initial investment. And the tired old argument of, “At least the kids are reading!” certainly applies here as well.

If Suggs’ new book was being praised as this generation’s Moby-Dick, I could see the necessity for an uproar. Surely if she didn’t write it, then the real author ought to be able to take credit for his or her masterpiece. But as this is another entry in a light, fluffy and over-saturated publishing arena, I think we should all agree to meet the news with an almighty shrug.

The publishing industry isn’t doomed because a YouTuber got a book deal. And before you rush to whine about the declining standards of readers, or the flimsy and embarrassing story lines that the majority of people love to consume, remember that Nathaniel Hawthorne said this in 1855 (arguably a good time for writers and readers of refined taste):

America is now wholly given over to a damned mob of scribbling women, and I should have no chance of success while the public taste is occupied with their trash — and should be ashamed of myself if I did succeed. What is the mystery of these innumerable editions of the ‘Lamplighter,’ and other books neither better nor worse?–worse they could not be, and better they need not be, when they sell by the 100,000.