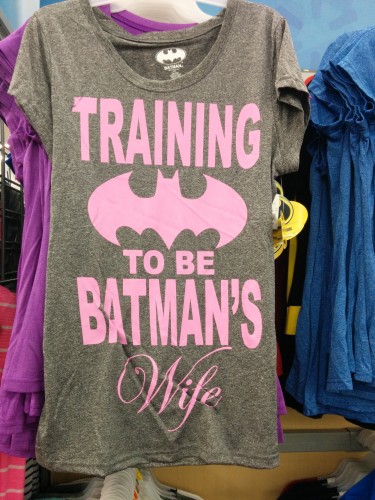 A few days ago, some eagle-eyed fans at a Long Beach Comic Con spotted an official DC t-shirt featuring Superman bending Wonder Woman over with the caption: Score! Superman does it again! Around the same time, another DC-approved shirt (pictured above) was seen online encouraging women to reach for the brassiest rings — not so much advising that they could do something with their own lives, but that if they tried really, really hard they might be lucky enough to marry someone cool.

At a time when the far more successful comic giant Marvel seems to be trying its damndest to cater to a greater portion of female fans, it doesn’t bode well for DC that they’re still pushing 1950s-era values on the modern marketplace. Particularly when one of their only big-name female Superheroes is being treated like an object for male attainment on their own products. People always want to argue about market demand, but the truth is that the market often dictates as much as it responds.

Women may want to be Batman’s wife because they’ve been taught to define their place in the world by their relationship status. In most modern media, women are little more than an extension of their relationships with a central male figure — they’re daughters, underlings, secretaries, girlfriends, wives, mothers, and so on. Certainly that’s not true if a story is told from a female perspective, but with so few Wonder Women and so many Batmen, it’s not a surprise that women would rather associate themselves with the “bigger” franchise. And then what’s left for them, other than to hope to be associated with the male hero?

DC was somewhat quick to respond, given all of the attention that the t-shirts received since the weekend, and issued the following statement:

DC Comics is home to many of the greatest male and female Super Heroes in the world. All our fans are incredibly important to us, and we understand that the messages on certain t-shirts are offensive. We agree. Our company is committed to empowering boys and girls, men and women, through our characters and stories. Accordingly, we are taking a look at our licensing and product design process to ensure that all our consumer products reflect our core values and philosophy.

Which is great. I mean, if I’m going to be a little bit snotty, I’d wonder why their core values and philosophies were missing when these shirts were approved in the first place. Or why Wonder Woman still doesn’t have her own feature movie.  But it’s nice that they’re saying that they’re going to take action.

And to some extent, I suppose you can argue that by lighting a bit of a fire underneath studios and companies saying, “This is not okay” can often be an effective way of dismantling these small instances of sexism or the devaluing of women. But the bigger question is: why is it still happening?

Why are we still having to take companies to task for stocking sexist merchandise and not giving us stand-alone female superhero movies or a greater range of female superheroes in general? Why not even give us a better range of women than just the stereotypical double-sided coin of Madonna or Whore? DC doesn’t want to offend women anymore, but they don’t necessarily seem that keen to cater.

If you really want to shake up an industry, why not offer us some new stories from some new angles? Marvel’s doing a great job — your move, DC.

2 thoughts on “The Sexist DC T-Shirt Debate; Or, Why Are We Still Dealing With This Shit?”