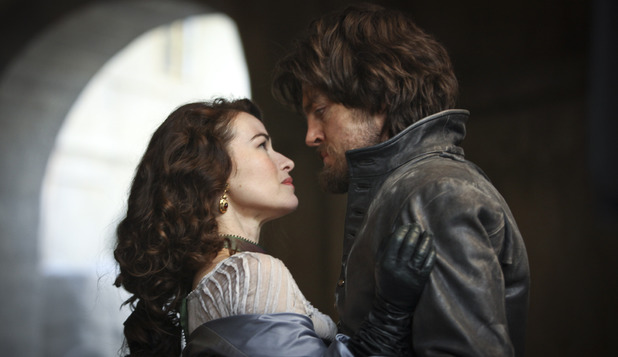 So it seems my first impression was pretty spot-on — BBC1’s The Musketeers was every bit as corny and ridiculous as I could’ve hoped, and I loved it.

There was definitely the odd stumble here and there — the crazy feminism episode, Porthos and the Thieves’ Guild, and the sheer number of female bodies spilling out of the Musketeers’ combined fridge of manpain. But at the end of the day, where this adaptation went right was in not trying to put too much of a “unique spin” on the original story. Dumas, for the most part, knew what he was doing. So while there’s a whiff of an “origin story” about this show that the movies don’t really have time to get into, and the stories of the week certainly had nothing to do with the source material, the overall tone was exactly what it should’ve been: fun.

Therefore it pains me to start on a negative, but here I go: it was hard to overlook the fact that we got very little resolution in the final episode — if anything, it felt like they spent more time setting up the next series than capping off the first. A lot of that may have had to do with the fact that the show wound up being much more episodic than I expected; Capaldi’s Cardinal really didn’t start any hard-core scheming until the very end, and Milady wasn’t exactly playing a long game across the whole episode run. Instead, a lot of low-stakes plots-of-the-week abounded, with small amounts of back story and romance here and there.

What this show nailed — and what kept it afloat in many of its sillier moments — was the fact that all of the actors had great chemistry with one-another. Even if the lines were over the top or the plots unbelievable, you could kind of put that to the back of your mind because watching any combination of actors together was a lot of fun.

I’m a little hesitant to praise the show for its treatment of women. On the one hand, Milady was probably the most complicated I’ve ever seen her, which in turn made Athos less of the faultless tragic hero. Which was good. What wasn’t as good was Constance, who gets praised again and again for being a tough little cookie and yet always winds up being somebody’s puppet. Not to mention the fact that — young, beautiful love notwithstanding — it’s a little hard to hate her husband for not liking the fact that she’s been sleeping with their boarder behind his back. He’s hardly the asshole here, though the show seems to keep trying to paint her as a long-suffering wife without showing any real suffering. And, of course, the feminism episode which I’m still trying to pretend didn’t happen.

But the finale specifically was great in all of its big-gunned glory. That final shoot-out was so over-the-top yet weirdly bloodless and all of the deep Athos feelings came to essentially no resolution as he lets his brother-killing wife go because of guilt or something. Also because this show would be serious diminished by Mamie McCoy’s departure.

One departure, however, we’re guaranteed of is Peter Capaldi, which made the way Richelieu was “dealt with” in the final episode more than a little ironic. The Queen, having discovered he tried to kill her, goes, “Well, don’t let that happen again! My husband really trusts me so, you know, watch your back.”

Yeah, that should do it. Thanks, Anne.

Not to mention the fact that then, a few moments later, he’s playing Maury to the Queen’s baby announcement. Seriously, it makes no sense that he wasn’t executed. But even more so after he’s clearly not done fucking with the Queen.

Add to that the fact that, as you may have heard, Peter Capaldi has another small side project he’s working on, so he is very unlikely to be back for Series 2.

I’d like to say that that’s a shame. Capaldi is a great actor, and Richelieu is a great part. And yet… is it sacrilege to admit that I won’t be that sad if they just re-cast him? Somehow it always felt like Capaldi was holding something back, which made no sense given that the character is hardly meant to be subtle when he’s swishing around in head-to-toe black leather. Not to mention the fact that when most of your scenes are with Ryan Gage’s King Louis, your camp level needs to be at 11 just to be heard at all. In any event, I love Capaldi but I’m happier to see him go off and be the Doctor than stay and be a lukewarm Cardinal.

Did you watch? Will you watch? You like books, girl? Tell me about it.