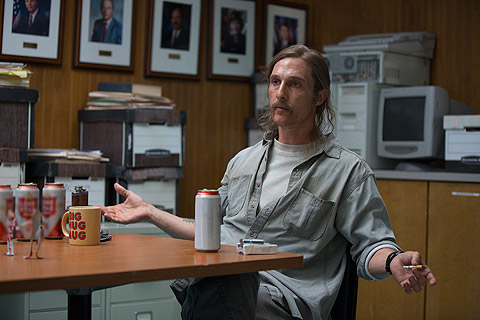 Dustin Rowles over at Uproxx has been covering True Detective with a certain amount of rabid enthusiasm since its debut early last month. Today’s first article (he does like 3 a day — the man is obsessed) is in part about creator and head writer Nic Pizzolato’s now-deleted tweet hinting that the next season will star female detectives.

To catch you up to speed, True Detective is a series currently starring Woody Harrelson and Matthew McConaughey as two small-town dicks investigating a series of what appear to be ritualistic murders. The show has been credited for turning the buddy cop concept on its ear, with the two never really getting along. In fact, their relationship seems to become more and more acrimonious as time goes on, but at the same time they have a strange grudging respect for one-another.

Harrelson plays Hart, a man who constantly talks up the virtues of family and duty and religion, though — like all good God-fearing, family-based men, can’t say no to whoring around, drinking and hitting his kids. McConaughey is Cohle, a haunted, deeply atheistic man dealing with the pain of divorce and the death of his only child.

But early on in the show’s run, Pizzolato announced that we wouldn’t be following the antics of Hart & Cohle (I really hope that wasn’t intentional) past this one 8-episode run. In fact, the intention was always that each season would focus on an entirely different case worked by entirely different detectives. The only unifying factor being this concept of “true detectives” and what that means for their jobs and personal lives.

Awesome, right? Because every actor knows that they’d only be tied down for one season, you could get pretty much anybody to sign on. You can already start making your fantasy detective drafts now.

Oh, but I forgot to mention: Please God, make sure that in this endless basket of choices, you don’t try to throw in any of those sneaky minorities or women, man.

Sadly, unlike the lovely Rowles, commenters over at Uproxx are pissed right off. People on Twitter — who were encouraged BY PIZZOLATO — to come up with their own ideal pairings for future seasons, are requesting that the writer consider some actors other than white men. And hey — Pizzolato is totally down! In fact, he hinted heavily via a now-deleted tweet that next season may indeed include a lady detective! Or maybe TWO lady detectives!

Well, if you can stomach it, have a look at the comments section of the article, which essentially argues that there’s no reason for Pizzolato to change his vision of the show just to appease some feminazis and the PC crowd.

Or don’t. Because that’s basically all they say anyway.

Women make up 51% of the population. Women are not a “minority fringe group,” they’re the majority of the planet’s population. It’s not insane to request that a show with the stated purpose of changing up its cast every single year have two female detectives if the previous year had two male ones. Or two POC. Or just a random sampling of the best actors for the job — which necessarily includes POC/WOC/women. And nothing about Pizzolato’s statements suggest that his vision was ever entirely about men. Or white men. Or white Southern men. Or white Southern men who were both in EdTV. Why is it that whenever someone suggests something “crazy” like having more female leads, you get the same peanut gallery reaction calling it “PC madness”?

If we were talking about a long-established show that had been on for 4 or 5 years which suddenly — “bowing to feminazi demands” — gender-swapped the whole cast, I could see the anger or the suggestion that this was some kind of “change of vision.” But again, the vision is literally “a new thing every year.” Do these guys really think it makes sense for a new cast to always be two white dudes?

I wish I had a better way to end this, but I feel like I’ve ranted myself out and instead want to end on a more positive note in which I state that a pairing of Viola Davis and Emma Thompson would basically be the best thing ever. Who would you like to see next season?

2 thoughts on “Next Season of True Detective Might Star Women, Internet Rages”