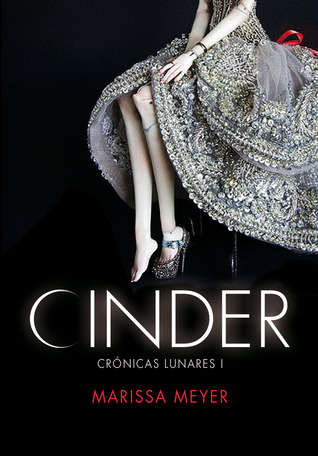 First, obviously the picture above isn’t the North American cover of Cinder, but since I thought it was so much more beautiful than the red shoe/bionic foot version you’ve probably seen everywhere at Chapters, that’s what I’m going with for the banner.

On to the review: Young Adult lit has been a topic on here for a while. Like most 20-somethings with an English degree, I always feel a bit guilty about reading books aimed at teenagers. They’re usually fun and creative, but at the same time I often feel shamed into reading “serious” books now that I’m an “adult.

There’s also the factor that many bloggers — particularly YouTube book bloggers or “Book Tubers” — will review YA Lit in a bid to attract more viewers, leading to (in my opinion) some soft-boiled reviews that don’t really tell you what they thought of the book. I imagine that this is probably because they hated it, but feel compelled to tell their viewers it was “nice” or “fun.”

Since I’m nestled in happy obscurity here on WordPress, I have free reign to be as grumpy as I like. So when I tell you that Cinder was pretty damn good, I hope you believe it.

The general premise is that Cinder is a teenage cyborg mechanic living during some point in Earth’s distant future in the city known as New Beijing. Obviously this is a futuristic/Sci-Fi take on Cinderella, and Cinder has the requisite evil stepmother but, taking a page from the terrible Drew Barrymore movie Ever After, only one of her step-sisters is evil, the other is nice — which you know means she won’t be around for long. Despite the fact that cyborgs benefit from the enormous advances made in medical science, they are traditionally scorned by “intact” humans and treated like lepers. The three conflicts are as follows: Cinder has a deep-dark secret, the twist being that she herself doesn’t even know; there’s a leutomosis virus, a global plague with no known cure; and the evil, mind-controlling inhabitants of the moon have begun to descend on Earth for the first time in years with the hope of marrying the soon-to-be-dead Emperor’s son, Prince Kai.

I will openly admit that all of that sounds incredibly goofy, and even in reading it, you often pause and think, “This is pretty fucking goofy.” But when you divorce your brain from the process (which is a requirement here), Meyer does tell a surprisingly addictive, engaging, funny and exciting story in-between all the hackneyed cliches. Updated fairytales have always been popular, but they’re usually not that great, as anyone who managed to make it through Tarsam Singh’s Mirror, Mirror can attest. Unlike Ella Enchanted, Meyer has given us a new and genuinely interesting spin on the classic story without too many heavy-handed winks at the audience.

I really only have two issues:

The first is that the book just sort of ends in the middle of the action and with no clear conclusion. I’m aware that it’s a series, and I don’t mean that it ends on a cliffhanger, I mean it ends in the “Wait, there aren’t more pages?” way. It’s a little disconcerting and sloppy.

The second is that the entire rest of the series (which will continue on for an unknown number of books) is all about different fairytale characters. The next book is Little Red Riding Hood and the two after that (which have yet to be released) are Rapunzel and Snow White, respectively. The trick is that Meyer has to balance all of them at once and if Scarlet‘s anything to go by, she’s finding it a touch difficult.

I’ve already read Scarlet, the sequel, already and I can say that the subtle nuances and overall story arc Meyer employed so well for Cinder starts falling apart when she adds a second updated fairytale character. More heavy-handed winks, less subtlety and playfulness.

In any event, I really enjoyed Cinder for what it was and will follow the rest of the series with a touch of cautious optimism.