About two or three years ago, Bloomsbury re-released the entire Harry Potter series with beautiful minimalist covers. What made the new illustrations a welcome change was the fact that they better encompassed the progression of the series from kid’s books to teen novels. The original covers of the UK editions always made the books look a bit too silly, particularly as the series got darker and bloodier. I loved them so much that I bought all 7 while I was studying in Italy and had to cart them home in a duffel bag. I regret nothing.

And yet I still preferred even the original Bloomsbury covers to the over-the-top versions (both on the cover and on the individual chapter headings) drawn by Mary GrandPre, Scholastic’s Potter illustrator. To be fair, I think the worst of the lot were the “adult” versions that both Bloomsbury and Scholastic released, because when you’re reading the most famous series of the decade, it’s not like people are going to be fooled by a sepia-toned car in the clouds (“Ooh, is that Infinite Jest you’re reading?” no one would ask).

Regardless, Scholastic will not be outdone, so they announced their plans to re-release the entire series with their own brand-new covers for the 15th anniversary of the first book’s release.

What beautiful artwork have they commissioned for the event? Surely they’re pandering more to the now 20- and 30-somethings who grew up with the books, rather than a new generation of children just getting into the series. Moreover, imagine the number of brilliant young graphic artists who grew up with the series themselves and could offer a true fan’s insight into the books with their work.

I mean, given the perspective we now have of the series as a whole, surely they’ve taken the time to truly re-imagine the covers for a post-Deathly Hallows world.

So… pretty much exactly the same, then.

To be fair, I don’t hate them, but… really? Could we not have gone in a different direction at all? Will the chapter headings even be different? Can we not give American kids the original British text now that we’re pretty sure they won’t be put off by the word “Philosopher”?

Nope. According to USA Today:

In an interview, Ellie Berger, president of Scholastic Trade Publishing, says the new covers aren’t meant to replace the original ones by Mary GrandPré, which still will be used on hardcovers and less expensive mass-market paperback editions.

But, he says, “we thought it was time for a fresh approach” for the trade paperbacks “as of a way of attracting the interest of a new generation of 8- and 9-year-olds who may know Harry mostly through the movies.”

Most baffling of all is the fact that the new illustrator, Kazu Kibuishi does beautiful work elsewhere, and I can’t help but feel the tight grip of Scholastic not allowing him the kind of creative freedom that a project like this (and an artist like this) deserves. 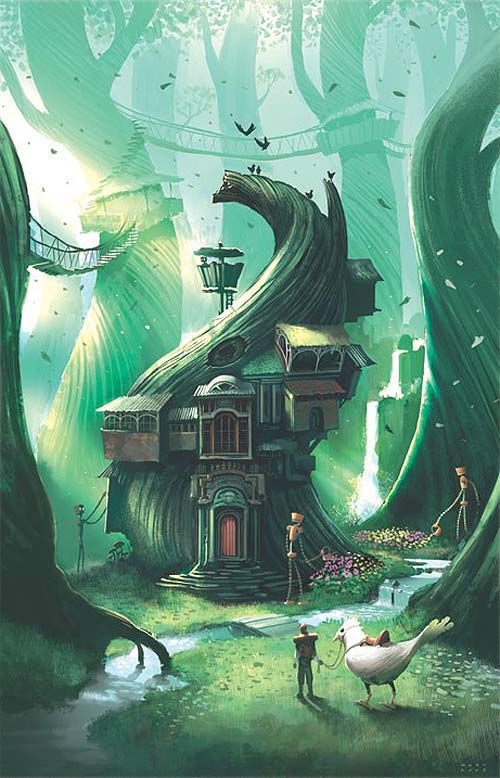 To be even more fair, I’m also judging this project solely on the first book, which admittedly is one of my least favorite anyway.

“As an author myself, I tried to answer the question, ‘If I were the author of the books — and they were like my own children — how would I want them to be seen years from now?’ When illustrating the covers, I tried to think of classic perennial paperback editions of famous novels and how those illustrations tend to feel. In a way, the project became a tribute to both Harry Potter and the literary classics.”

The whole series is due out in September, but hopefully we’ll get at least a few more leaked covers before then. As it stands I’m not optimistic but, if I’m being honest, I’ll probably buy them all out of heart-wrenching nostalgia.

If I can grand-stand for a moment, what I’d really like would be a proper mini-series for each book on the BBC. The movies are fine, but I feel like so much had to be trimmed and cut from the books that might seem inconsequential to a non-fan, but often what I loved most about Hogwarts was the every-dayness of living and studying at a magic school. That gets lost when you need a 10-minute Quidditch sequence (even though they then conveniently left out the actual school sports passion that Quidditch was supposed to inspire).

What about you? Do you like them better? Do we even need re-releases?

11 thoughts on “Are the New Scholastic Harry Potter Covers Worse than the Originals?”