The difficult thing about a book blog is that, unlike movies, nothing really compels me to exclusively read and review new releases. Mainly because trustworthy, unbiased and professional reviews are hard enough to find for new books — let alone to find on a website that collects and processes them as efficiently as Rottentomatoes.

So most of the time I just read what I feel like reading. But in this case, when I’m tackling books by an author who’s as much of a celebrity as any author can be right now, and whose books are far from unknown, it’s really hard to present any feelings I might have on Gaiman’s work without sounding irrelevant and out of date. So instead of writing unnecessary reviews of Coraline (it’s delightful — go read it) or Stardust (it’s a little overwritten, but go read it), I thought it would be more interesting to focus on the current problem of fans.

I hadn’t read any of Neil Gaiman’s work until now because the media and Gaiman’s fans have made the author and his work seem like  higher-quality Tim Burton. Sure, there are similarities: both write the fantastical as if it were more normal than normal, both like to pander to kids and teens (or adults who never stopped being teenagers), both have the bushy (possibly/definitely dyed) black hair and one is a Brit married to an eccentric American, the other is an American married to an eccentric Brit. 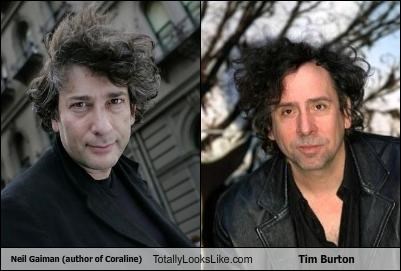 But while it’s become incredibly fashionable to dump on Burton, especially in light of yet another underwhelming collaboration with Johnny Depp, Gaiman has only risen in credibility and popularity. All the same, there remains one problem: Gaiman’s fans. I tend to avoid authors who receive slavish, twee and — most importantly — over-familiar reviews from their fans. And Jesus does Gaiman have those in spades.

A perfect example is this (unabridged — sorry, it was all too beautifully insane) review from L.H. on Goodreads:

Damn you. Damn you straight to hell. You’ve written beautiful faerie stories in your plainspoken postmodern prose, and left my own projected frontiers woefully trodden. It has nothing to do with your brilliance. Had I been born before you I would most likely be the one writing clever novels about fallen stars and sly gods. I would’ve, I swear!

But instead, I was born forty years too late, and your Faerie, Neil, -do you mind if I call you Neil? Your Faerie, like all of your creations, is a perfectly plausible reality, praised by literary critics, the literate’s dollar, and even the behemoth Movie Adaptation. Your prose is simple, if you’ll pardon my saying so, not elevated, with exotic adjectives, but simple and modern, easily accessible, solid, quality prose. This reflects nothing upon you, of course -your authorship is the perfect marriage of your own writing talent and our modern culture. Shakespeare’s work seems ridiculously complicated to us now, but he wrote for the masses, just like you. Our masses do not value rhetorics, metre, or internal rhyme, or I’m sure you’d write with such tools.

No, Neil, you write with one very powerful tool -distilled imagination. Escapism, unreality, creativity, novelty, and all their side effects. When the surrounding world seems unbearable, the ever-growing fetus of imagination is hope. In slavery, in misery, in poverty, in isolation, a person can escape into the brighter day of dreams, or the unknown future, or the magic of Faerie.

And in a world where the demons in the closet are thrust into a florescent laboratory, where telescopes and cameras record the crags and terrain of places where once there were dragons, where we identify which crannies of the human mind are responsible for fear, or love, or sorrow, and even plot out their corresponding hormonal compositions for manipulation and control… perhaps in such a world we must desperately escape into the unexplorable reaches of Faerie.

The rules are simple there. Help anyone in need, and graciously accept their payment. Stick with unerringly polite manners, but never let down your guard. You need a sharp wit to go with a good heart. Never eat faerie food.

Popular vote does not elect poor leaders in Faerie. Weapons are easily recognizable, not hidden in letters or water bottles. Death stands tall with his scythe and cowl instead of creeping behind health care bills and drug overdoses, and when he does come, death was either justified, or will be avenged. Villages in Faerie are rarely overrun with “revolutionaries” toting machine guns or skeletal toddlers with distended bellies. The old do not die alone there. Despite enchanted princes and disguised witches, Faerie makes more sense than our world, and if it doesn’t, it’s alright. It’s Faerie.

So we escape into your novels, Neil, and into the worlds of Harry Potter and Lyra Silvertongue, and we love you for it (or in my case, hate you). We are too jaded to suspend disbelief, yet we ache for magic. We won’t creep into a darkened room for the show, but demand that you blossom crystal snowdrops here in Times Square, your right hand outstretched for our inspection while your left clutches a Starbucks cup. We cannot leave our world for Faerie anymore, so you bring it to us in pleasurable words, easily explainable, hidden just beyond an English countryside wall, or under our feet, or in corners we don’t examine too closely.

Please keep it up.

Seriously, what the fuck.

Being that I’m socially awkward, I’ve read and watched a lot of good and stupid fantasy and there is nothing I hate more than people who act like “Faerie” is a real place, or that magic of any kind has defined rules, and that anything that violates the laws regarding these totally made-up things is “wrong.” Most recently, I saw someone sincerely argue that having Sookie on True Blood be a fairy (‘faerie’ seems horribly pretentious to me) isn’t incredibly lame because “the fae” (doubly pretentious) is a well-defined and compelling genre/trope/whatever. I had no idea people were so defensive about fairies, but apparently this is a big deal for a lot of fantasy enthusiasts.

Posture, Lara — It’s important to preserve the seriousness of Faerie.

A friend of mine wrote a paper about the influence of fans in the digital age, focusing on the last two or three Harry Potter novels, wherein J.K. Rowling was compelled to assert that Harry and Hermione were not extra-special friends because of the rage of a number of highly confused ‘shippers. Shows like Community — which already loves reveling in meta 4th wall destruction — often treat their audience like another character and will actively respond to particular comments or sentiments, such as “no more Jeff and Britta.”

Merlin, meanwhile, got wind of the fanbase’s love of the show’s unintentionally homoerotic moments and began including winking moments of partial nudity or sexy misunderstandings between its two male stars, effectually sucking the fun out of it. Sherlock runs the same risk, although gay jokes have been a mainstay of the modernized BBC series since its pilot.

Gaiman seems to be immune to this so far in his writing, although he does have a great Tumblr account where he regularly responds to questions/compliments, but the problem of fans “taking over” particular books or shows has become a problem. The issue is that while it’s a great idea to have an open flow of communication between the writers and the fans in theory, in reality it’s a bit like having an overly-permissive parent who lets you eat cake for breakfast — it loses its thrill quickly and outcome isn’t great.

4 thoughts on “Neil Gaiman and the Problem of Fan Interaction”