Kristin flat-ironed her honey-and-wheat-colored hair into a Rachel and put on her flowiest kaftan, resplendant in swirls of blue, darker blue and lighter blue.

The best in clothing, nature and hair.

“Betsy walked into the room, wearing white knee-length leggings, a long pink sweater cinched tight at the waist by a wide silver belt, and Ugg boots. Her long blonde hair hung in frizzy ringlets to the middle of her back. She looked like she was trying out for some Disney kid show where people burst into song at the drop of a hat.”

Because Hannah would be sued for just flat-out saying High School Musical, I presume. But even better than that, High School Musical, Camp Rock and all of the other “Disney kid shows where people burst into song at the drop of a hat” started up in 2006, a year after this book takes place.

“After a long, hot shower, [Michael] felt ready to start his day. Dressing in his navy wool slacks and a crisp white Armani dress shirt, he left the room.”

“Edward Keller walked into the office slowly, looking nervous. He was a big man with close-shaved black hair and a bush black Tom Selleck mustache. He was pale and sweaty-looking in his plaid shirt and Wrangler jeans.”

“Seth walked into the living room chewing on a Tootsie Pop. Holding a tattered copy of Stranger in a Strange Land, he was wearing tight jeans and high-tops and a ratty Gears of War tee shirt. His black hair was drawn back from his narrow face in one of those samurai knots.”

“He was dressed all in black — wrinkled corduroy pants and an oversized black short-sleeved shirt with an envelope stuck in the breast pocket — and his hair pulled back in a samurai topknot that only Johnny Depp could pull off.”

Did you know that this character is a soulful Native American teenager? He is!

Also, can we all agree to get over Johnny Depp?

“Chris tucked a straggly strand of hair back into his messy ponytail. Today he was wearing a black tee shirt, a fringed suede vest, baggy cargo pants, and black plastic clogs. An expensive leather messenger bag hung across his body.”

This is the PTSD specialist that Michael enlists for his case and later his wife. “Chris Cornflower” is a psychiatrist who was also a POW in ‘Nam. Which is why he dresses like a dirty hippie and employs a young lady with a nose ring and purple hair, but gosh-darnit, he’s the best!

“[Lulu] went back to her room, stood in the pile of stuff with her hands on her hips, studying the disarray. [Michael] counted silently to ten. Finally, she chose a pair of pink pants decorate with daisy appliques, and a blue Toy Story tee shirt. The green striped socks added a clownlike touch, but what did he care?”

What would he care? She’s five. Of course she’s going to wear wacky shit.

“Gloria left the bathroom and closed the door behind her, but not all the way. A slice of air showed through.”

Pardon me? A slice of what?

“Michael was literally at the end of his rope. He was trying to give Jolene space and let her grieve, but she was pulling them all under water, drowning them, and he didn’t know what to do.”

No, he was figuratively at the end of his rope, Kristin. Literally would require him to be holding the end of a rope. Also Jolene is not literally drowning her family, but I wish she would.

“An eagle flies past, dives deeply into the blue water, and comes up with a bright silver salmon in its beak, dripping water on Jolene as it soars to the top of an evergreen.”

The best in loving America. 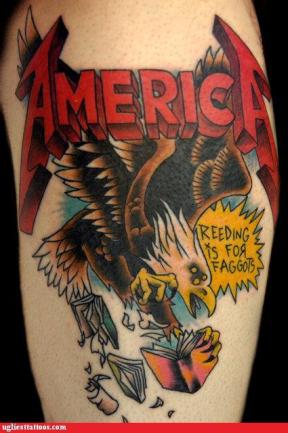 “Michael walked toward his wife. He hadn’t expected any of this. How was that? He prided himself on his intelligence, but he’d been wrong, blinded by selfishness or politics or intellectualism. For years he’d watched news reported about the glocal war on terrorism and followed images of soldiers in the desert and he’d thought about the politics of it all, about weapons of mass destruction and George W.’s declaration of war and the wisdom of arming and sending out troops. He’d argued with colleagues about it — while he sat safe and warm and protected in his country. He’d argued about the true cost of the war. He hadn’t known shit.”

Yeah! Take that, Liberals! Sitting around and reading your New York Times and sip your espresso and debate your politics like you’re all smart, but you’re not because you know nothing!

“New York was a city that showed off its greatness, sought to make tourists look at man’s accomplishments with awe. D.C. knew that man’s greatness lay not in stone adn steel, but rather in ideas and decisions.”

“In abstract, Jolene had known that Washington, D.C., was a city of monuments. She’d read about the various places dedicated to the country’s history, but until she stepped out onto the busy streets, she didn’t quite understand how they all joined one to the other and told a story. […] She’d imagined a New York-type city, full of thrusting skyscrapers. But this city felt grounded in a way she hadn’t expected; there were no high-rises, no canyons of concrete that made passerby feel small.”

Ah, yes, the ground canyon — renound as one of the tallest natural wonders in the world.

CEO of Mommycorp: The Most Important Job in the World

And how filthy men underestimate it.

“[Michael] knew it was selfish of him, and small, but it pissed him off to be left here as Mr. Mom. Not that he could tell anyone this. He’d look like an asshole if he admitted that he didn’t want this job that had fallen in his lab, didn’t know if he could even do it. How was he supposed to manage a sixteen-person legal firm, defend his clients, and handle the day-to-day minutiae that came with raising two kids? Carpool. Field trips. Meals. Laundry. Homework. Just the thought of it overwhelmed him.”

First, it should be noted that he both hires a housekeeper to come in once a week and that his Mother essentially moves in and handles most of these herself. But still, the point has been made: he finally realizes how tough it is to be a Mom, the dirty scoundrel!

“The first week without Jolene almost drove Michael into the ground. He’d had no idea how much there was to do around the house and with the kids.”

“How have men done it all these years, gone off to war and left their kids behind?”

“They had wives,” Tami said simply.

“He didn’t think he could do this. And this was taking care of his children. What in the hell was wrong with him? How could he be such a success in the courtroom and in his office and with his clients but fail so completely with his own family?”

“He heard that all the time; people said it to him and he shrugged it off, thinking, no, not really; my wife is just in the Guard. Because HE wasn’t in the military, it hadn’t felt real to him, and God knew he’d never liked her commitment or supported it.”

Couldn’t decide if this belonged in the America or Men section, but the beautiful moment where he realizes that he doesn’t care about the military even though it’s his dumb wife’s job cinched it.

“[Michael] got up and picked [Jolene] up as if she weighed nothing and set her on the toilet, then he reached over and unspooled a wad of toilet paper, handing it to her like a perfect white rose. She’s peed in front of him a thousand times in their marriage, but now the act felt painfully intimate. She thought about asking him to leave and changed her mind. Whatever was happening now between them, she didn’t want to ruin it.

She flushed the toilet when she was done. He knelt in front of her, helped her pull her panties back up.”

3 thoughts on “Even More Hilarious Quotes from Home Front”